Burnt dog is treated with honey

A jar of local honey in the kitchen does more than sweeten tea or toasts, but works well on burns - skip the ice, aloe vera or anything else. It really works 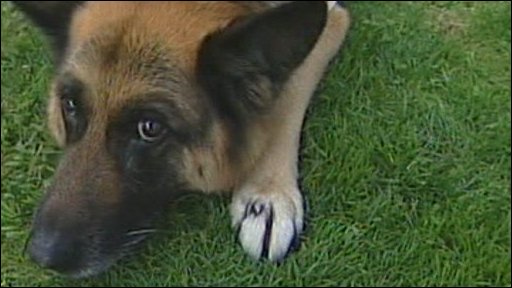 A dog which was pulled from a house fire in Cornwall is being treated with honey pads to help heal her wounds.
Lady, the alsatian was found stuck under burning ceiling tiles after the fire at her owner's home near Stithians.
The treatment of eight-year-old dog, who suffered severe burns down one side and on her back, includes pads impregnated with manuka honey.
Owner Cyril Bond, 77, said her condition had improved because of the treatment.
'Very impressed'
Lady was trapped for two hours before fireman rescued her from the burning building.
Mr Bond said he was given the good news that she survived after he was taken to hospital.
He said: "One of the nurses came over and said the police had been on the phone to say the fire brigade got her out and she was on oxygen."
She is thought to have survived because she found an air pocket.
As part of her treatment, which has been ongoing for several months, her bandages which contain honey-coated dressings, are replaced several times a week.
Vet Amanda Manley, who works at the Cornwall Animal Hospital, said she believed the honey had greatly improved Lady's condition.
"I'd like to say it's all down to the honey, but to make a proper judgement you need to have a scientific control.
"But I'm very impressed and I'd use it again in this situation."
The honey is produced by bees feeding on the Manuka bush, which mainly found in New Zealand.
Manuka dressings for wounds were licensed for use in NHS hospitals in 2004.