With this new mapping of royal jelly proteins, future studies will examine not only the antimicrobial aspects of this magnificent product produced for the queen, but numerous other beneficial effects already documented. 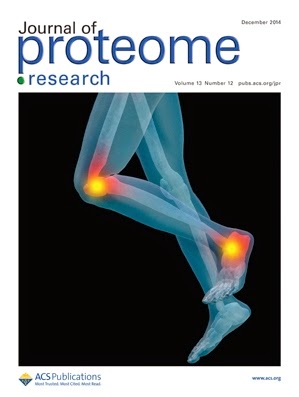 The proteins in royal jelly (RJ) play a pivotal role in the nutrition, immune defense, and cast determination of honeybee larvae and have a wide range of pharmacological and health-promoting functions for humans as well. Although the importance of post-translational modifications (PTMs) in protein function is known, investigation of protein phosphorylation of RJ proteins is still very limited.

To this end, two complementary phosphopeptide enrichment materials (Ti4+-IMAC and TiO2) and high-sensitivity mass spectrometry were applied to establish a detailed phosphoproteome map and to qualitatively and quantitatively compare the phosphoproteomes of RJ produced by Apis mellifera ligustica (Aml) and Apis cerana cerana (Acc). In total, 16 phosphoproteins carrying 67 phosphorylation sites were identified in RJ derived from western bees, and nine proteins phosphorylated on 71 sites were found in RJ produced by eastern honeybees. Of which, eight phosphorylated proteins were common to both RJ samples, and the same motif ([S-x-E]) was extracted, suggesting that the function of major RJ proteins as nutrients and immune agents is evolutionary preserved in both of these honeybee species. 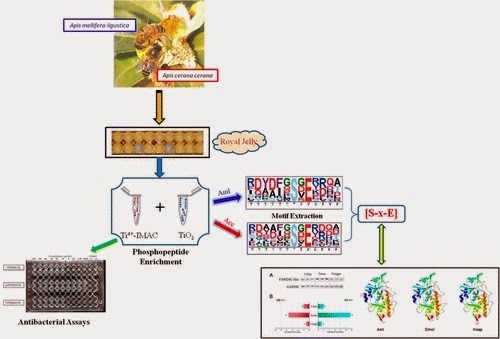 All eight overlapping phosphoproteins showed significantly higher abundance in Acc-RJ than in Aml-RJ, and the phosphorylation of Jelleine-II (an antimicrobial peptide, TPFKLSLHL) at S6 in Acc-RJ had stronger antimicrobial properties than that at T1 in Aml-RJ even though the overall antimicrobial activity of Jelleine-II was found to decrease after phosphorylation. The differences in phosphosites, peptide abundance, and antimicrobial activity of the phosphorylated RJ proteins indicate that the two major honeybee species employ distinct phosphorylation strategies that align with their different biological characteristics shaped by evolution. The phosphorylation of RJ proteins are potentially driven by the activity of extracellular serine/threonine protein kinase FAM20C-like protein (FAM20C-like) through the [S-x-E] motif, which is supported by evidence that mRNA and protein expression of FAM20C-like protein kinase are both found in the highest level in the hypopharyngeal gland of nurse bees.