A consistent thread in all studies involving bee propolis is its complementary effects, whether it enhances the drug or protects the body from negative side effects. This study determined that propolis detoxified the liver and kidney from the toxic effects of this cancer drug. Ironically, propolis is also proven to enhance the tumor destructive power of breast cancer medication. It would be well-recommended for anyone preparing to undergo chemotherapy, to take propolis daily before, during and after treatment...


Ameliorative effect of propolis against cyclophosphamide-induced toxicity in mice
Pharm Biol, 2014 Oct 7:1-7. [Epub ahead of print] 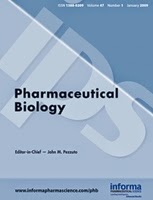 Context:
Cyclophosphamide (CTX) is a common anticancer agent used for the treatment of several malignancies. However, upon treatment, it induces severe toxicity due to its oxidative stress capability. Propolis, a natural product collected by honey bees, has shown several biological activities, such as free radical scavenging and antioxidant agent.

Results:
The results indicated that CTX-injected mice showed an increase in the levels of alanine aminotransferase (ALT), aspartate aminotransferase (AST), urea, and creatinine and a decrease in the total number of white blood cells (WBCs) and platelets. Moreover, dramatical changes in the histological architectures of the liver and kidney were observed. The mice that were injected with CTX/propolis showed an improvement in the levels of ALT, AST, urea, creatinine, WBCs, and platelets. Moreover, the histological picture of the liver and kidney was significantly improved.

Conclusions:
In conclusion, propolis might be considered an effective agent in ameliorating the toxicity resulted from CTX treatment.