One of the many compounds of Propolis, CAPE has the super-hero force to aid the human condition...

Caffeic acid phenethyl ester (CAPE), an active component of propolis, has been proven to have anti-inflammatory and antiallergic properties. We have investigated the activity of CAPE in regulating cytokine-induced eotaxin production and its related signal protein, signal transducer and activator of transcription 6 (STAT6), in human lung fibroblast.

The CCD-11Lu human lung fibroblast cell line was used as an in vitro model. Cells were pretreated with CAPE followed by stimulation with interleukin-4 and tumor necrosis factor alpha. The levels of eotaxin in cultured supernatants were measured by enzyme-linked immunosorbent assay. The amounts of STAT6 and phosphorylated STAT6 in cellular nuclear protein extracts were determined by Western blot analysis. STAT6 DNA binding activities were detected by electrophoretic mobility shift assay.

CAPE inhibited the production of eotaxin protein in stimulated human lung fibroblast cells in a dose-dependent manner. This activity is, at least, through STAT6 inhibition. We suggest that CAPE is a promising agent in controlling eotaxin secretion and subsequent eosinophils influx and may therefore have a potential role to play in treating allergic airway disease
No comments:

Propolis comes to the rescue, once again, to potentially reduce the overabundant use of antibiotics in our food chain...

Propolis is a honeybee product showing several biological properties that enhance the immune response, depending on the concentration and intake period. Because propolis possesses an immunomodulatory action on mammals, the objective of our study was to investigate the effects of propolis on the humoral immune response of laying hens by evaluating antibody production. Laying hens (ISA Brown) were divided into 5 groups with 7 birds each. Group 1 was a nonimmunized control, whereas birds in group 2 were immunized intravenously with SRBC, and those in groups 3, 4, and 5 were treated intraperitoneally with propolis (2, 10, and 50 mg/kg, respectively) on 3 consecutive days and then inoculated intravenously with SRBC. Hematological and serological analyses were carried out on d 0, 3, and 38. Natural and specific antibody levels were determined by hemagglutination with rabbit red blood cells and SRBC, respectively. Propolis-treated birds (50 mg/kg) showed a significant decline in heterophils and in the heterophil:lymphocyte ratio. After SRBC immunization, significant increases in levels of IgG were observed in groups 4 and 5. Furthermore, higher levels of natural antibodies were observed in propolis-treated laying hens. The administration of propolis to laying hens increased the production of IgG specific to SRBC and natural antibodies, and could be used to increase antigen-specific antibody responses to vaccines
No comments:

honey's capacity to heal wounds dates back to 1700BC, also well-documented during the 2nd Boer War (1902) and for the past 25 years at CHU in Limoges France; effective then and still effective today...

Honey is recognized traditionally for its medicinal properties and also appreciated as a topical healing agent for infected and noninfected wounds. This study evaluates impact of honey-based occlusive dressing on nonhealing (nonresponding to conventional antibiotics) traumatic lower limb wounds (n  ) through clinicopathological and immunohistochemical (e.g., expression of p63, E-cadherin, and Collagen I and III) evaluations to enrich the scientific validation. Clinical findings noted the nonadherence of honey dressing with remarkable chemical debridement and healing progression within 11–15 days of postintervention. Histopathologically, in comparison to preintervention biopsies, the postintervention tissues of wound peripheries demonstrated gradual normalization of epithelial and connective tissue features with significant changes in pepithelial cell population, reappearance of membranous E-cadherin (P < ), and optimum deposition of collagen I and III (P< ). Thus, the present study for the first time reports the impact of honey on vital protein expressions in epithelial and connective tissues during repair of nonhealing lower limb wounds.


"The honey with its diverse chemical constituents (organic and inorganic) provide therapeutic support to nonhealing lower limb wounds with minimum trauma during redressing and debridement as well as in healing without hyper-granulation and less scarring. Further, therapeutic potential has been demonstrated at molecular levels through immunohistochemical depiction of prime molecular expressions in wound biopsies. The gradual increase in cell population and membranous expression of E-cadherin pointed out the transformation of nonhealing wound into healing one and achievement of collagen I and III ratio towards normalcy in posttherapeutic periods indicated proper deposition of collagens in the regenerated skin during healing."
No comments:

See the ORAC chart we found comparing a different source of propolis to other foods with antioxidant properties ...

The antioxidant capacity of propolis from the southern region of Uruguay was evaluated using in vitro as well as cellular assays. Free radical scavenging capacity was assessed by ORAC, obtaining values significantly higher than other natural products (8000 µmol trolox equivalents/g propolis).

In addition, we found that Uruguayan propolis were able to induce the expression of endothelial nitric oxide synthase and inhibit endothelial NADPH oxidase suggesting a potential cardiovascular benefit by increasing nitric oxide bioavailability in the endothelium. 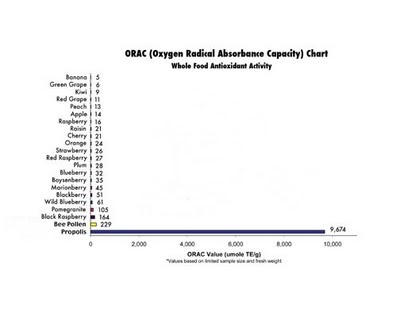 a great explanation from friend and fellow Apitherapist, Frederique Keller, L.Ac., Herbalist and creator of BeePharm Apitherapy Rx for Health products... the medicinal use of raw honey, bee pollen, bee bread, royal jelly, bee venom and much more!
No comments:

impressive results from propolis continue to reinforce its potent value for animals, as well as humans...
Effect of Ethanolic Extract of Propolis on Growth Performance and Plasma Biochemical Parameters of Rainbow Trout (Oncorhynchus mykiss)
Fish Physiol Biochemistry, 2011 May 11

This study was conducted to evaluate the effect of ethanolic extract of propolis (EEP) on growth performance and plasma biochemical parameters of rainbow trout (Oncorhynchus mykiss).

These results indicate the potential to use the EEP as a growth promoter, hepatoprotective agent, and immunostimulant for rainbow trout.
2 comments:

more promising news for the use of Propolis as an anti-tumor agent...

Breast cancer (BC) patients use alternative and natural remedies more than patients with other malignancies. Specifically, 63–83% use at least one type of alternative medicine and 25–63% use herbals and vitamins.

Propolis is a naturopathic honeybee product, and CAPE (caffeic acid phenethyl ester), is a major medicinal component of propolis. CAPE, in a concentration dependent fashion, inhibits MCF-7 (hormone receptor positive, HR+) and MDA-231 (a model of triple negative BC (TNBC) tumor growth, both in vitro and in vivo without much effect on normal mammary cells and strongly influences gene and protein expression.

In conclusion, our results strongly suggest that CAPE inhibits MDA-231 and MCF-7 human breast cancer growth via its apoptotic effects, and modulation of NF-κB, the cell cycle, and angiogenesis.
No comments:

note the use of propolis extract, the same type used by others who've experienced rapid healing after post-dental procedures...

Methods: This study was performed in the Faculty of Dentistry and Pharmacy at Erciyes University, Kayseri, Turkey from February to April 2010. Ethanol extract of propolis (EEP) was prepared from propolis collected from Kayseri, Turkey, and proper media for microorganisms were prepared using sterile broth medium to give final concentrations between 0.002-2.4 mg/ml for propolis, 0.000125-0.512 mg/ml for CHX, and 1:2-1:4096 dilutions for NaOCl and BioPure MTAD. Using the macrobroth dilution method, MIC, and MBC values of irrigants on the growth of E. faecalis and C. albicans were determined.

simply put, propolis is a powerful protector, preventatively and post-operatively...

Propolis Attenuates Cobalt Induced-Nephrotoxicity in Adult Rats and Their Progeny

The aim of this study was to evaluate the biochemical changes in cobalt-exposed rats and to investigate the potential role of Tunisian propolis against the cobalt-induced renal damages.

Twenty-four pregnant Wistar rats were divided into four groups and were treated as follows: group 1 (control) received distilled water; group 2 received 350 ppm of CoCl2 in drinking water; group 3 received 350 ppm CoCl2 in drinking water and a propolis-supplemented diet (1 g/100 g of diet); group 4 received a propolis-supplemented diet (1 g/100 g of diet) without cobalt. In the cobalt group, a significant decrease in body, absolute and relative weights was noted when compared to controls.

The administration of cobalt to pregnant rats from the 14th day of pregnancy until day 14 after delivery resulted in an increased level of renal malondialdehyde, a decreased renal content of glutathione and antioxidant enzyme activities such as superoxide dismutase, catalase and glutathione peroxidase in lactating rats and their pups.

A statistically significant increase in plasma urea and creatinine serum levels was seen in treated female rats and their pups. Histopathologically, the cobalt-administration induced degenerative changes in the kidney of lactating rats and their pups.

When compared with cobalt-treated rats, those receiving the propolis supplementation (along with cobalt-treatment) had lower malondialdehyde levels, higher antioxidant activities and the cobalt-related histopathological changes in the kidneys were at lower severity.

Our results suggested that the propolis might be a potential candidate agent against cobalt-induced nephrotoxicity in adult and juvenile rats when administered to female rats during the late pregnancy and the early postnatal period.
No comments:

Bee Venom for the Treatment of Parkinson Disease

Bee Venom for the Treatment of Parkinson's Disease (MIREILLE)
ClinicalTrials.gov

This study is ongoing, but not recruiting participants.

Sponsor: Assistance Publique - Hôpitaux de Paris
Information provided by: Assistance Publique - Hôpitaux de Paris
ClinicalTrials.gov Identifier: NCT01341431
Official Title: Evaluation of the Symptomatic and Neuroprotective Effects of Bee Venom for the Treatment of Parkinson Disease
Purpose: The purpose of this study is to evaluate the efficacy of repeated (monthly) injections of bee venom on motor symptoms of Parkinson's disease over a period of one year, also the potential effects of this treatment on disease progression compared to placebo (saline injections)…
No comments:

This is the first report of TRPA1 activation by fatty acids.

In this study, we searched for novel agonists of TRPA1 and TRPV1 from a nonpungent food, royal jelly (RJ).

Next, we studied the potencies of other lipid components for both receptors. Most of them have higher affinity to TRPA1 than TRPV1. Among them, dicarboxylic acids showed equal efficacy for both receptors, but those are present in only small amounts in RJ.

We concluded that the main function of RJ is TRPA1 activation by HDEA and HDAA, the major components of the RJ lipid fraction.
No comments:

HTLV-1 is the etiological agent of an aggressive malignancy of the CD4+ T-cells, adult T-cell leukemia (ATL) and other sever clinical disorders. The viral Tax protein is a key factor in HTLV-1 pathogenicity. A major part of Tax oncogenic potential is accounted for by its capacity of inducing the transcriptional activity of the NFκB factors, which regulate the expression of numerous cellular genes.

Propolis (PE), a natural product produced by honeybees, has been used for long time in folk medicine. One of PE active components, caffeic acid phenylethyl ester (CAPE), was well characterized and found to be a potent inhibitor of NFκB activation. Therefore, the aim of this study was to pursue the possibility of blocking Tax oncogenic effects by treatment with these natural products.

Human T-cell lines were used in this study since these cells are the main targets of HTLV-1 infections. We tried to determine which step of Tax-induced NFκB activation is blocked by these products.

Our results showed also that PE and CAPE strongly prevented both Tax binding to IκBα and its induced degradation by Tax. However, both products did not interfere in the nuclear transport of Tax or NFκB proteins.
1 comment: