In reviewing studies of propolis use in mucous linings of the body, we find it very effective against bacteria and with anti-inflammatory properties, it speeds healing.  This study found propolis more effective than Listerine® and CHX at reducing oral bacteria.

OBJECTIVES:
Our purpose was to determine the antibacterial properties of propolis and to evaluate its use as an antibacterial mouthwash with minimal complications. 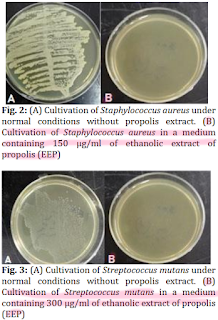 CONCLUSION:
According to the results, propolis mouthwash was more efficient against the studied oral bacteria compared to CHX and Listerine®.