There are numerous studies being conducted worldwide on Bee Venom Therapy (BVT) for its therapeutic effects, ranging from Alzheimer's Disease and Arthritis to Multiple Sclerosis and Parkinson's Disease. To better understand BVT,  it's best to contact an Apitherapy association. Visit www.apitherapy.com for a global listing.

Bee Venom therapy, sometimes called Bee Sting therapy, is a form of Apitherapy that may be a helpful treatment for those suffering from Multiple Sclerosis.
What is Multiple Sclerosis?
Multiple Sclerosis, or MS, is characterized by destruction of the myelin protective sheath that covers the spinal cord and nerves. While it is not clear why MS occurs, some believe it is an auto immune problem in which the immune system starts attacking the central nervous system. The tears, rips, and open spots in the covering of the nerves can “short circuit” the electrical signals that the brain and body use to communicate with one another.
Those who have MS suffer from symptoms that include hot flashes, dizziness, and incoordination. MS is a degenerative disease, meaning it progressively gets worse. There is currently no cure for MS. There are several medications that may help with some of the symptoms, but they have side effects.  One of the treatments for MS, making a comeback from ancient Egyptian times, is bee venom therapy.
Why does bee venom help those with MS?
Bee venom therapy uses live honey bees for the benefits of their stingers. Some patients with MS who use bee venom therapy have noted decreased pain, increased coordination, and increased muscle strength. 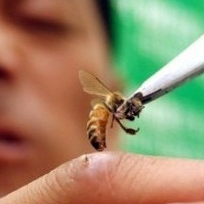 So why would a bee sting help those with MS? Scientists believe it is because of two main ingredients in bee venom—adolapin and melittin. These compounds may reduce the pain and inflammation associated with MS. Bee venom therapy as a whole is thought to encourage the human body to release natural healing defenses to protect itself from the sting. These chemicals may heal other ailments in the body.
Pat Wagner, also known as “The Bee Lady” was diagnosed with MS at age 19. She claims on her website that bee venom therapy is the best treatment for MS. After receiving her initial bee stings, her hearing improved as well as her internal thermostat. She no longer felt chills, and she started moving around without her wheel chair. Her husband was so encouraged with her development that he bought a bee hive. She still uses bee venom therapy to this day.
Is there research on bee venom therapy and MS?
Currently there is very limited research that has been conclusive on bee venom therapy. The information about bee venom therapy being used for any form of treatment comes from case studies. There are reportedly thousands of patients using bee venom therapy as an alternative to medications typically taken for the treatment of MS.
just began a research project for bee venom therapy, funded by the Multiple Sclerosis Association of America. This study will be conducted for one year and will serve as the first of many research studies performed on the hypothesis of bee venom therapy for those with MS.
Bee Venom therapy Precautions
Some people are highly allergic to bee stings. The allergic reaction can result in anaphylactic shock and can result in death. Do not try to use bee venom if you are not sure if you are allergic to bee stings. Bee sting allergies, like all allergies, may develop over time. Just because you were not allergic at one time does not mean you are currently not allergic to bee stings. There are 10,000 health care professionals that specialize in bee venom therapy. Please consult one of these individuals before attempting bee sting therapy.