With over 185 organic compounds identified in Royal Jelly, is it any wonder that it possesses the same wound healing capacity as honey...

BACKGROUND:
Foot ulcers and infections are the major sources of morbidity in individuals with diabetes mellitus. This study aimed to evaluate the efficacy of topical Royal Jelly (a worker honey bee product) on healing diabetic foot ulcers.
METHODS:
Diabetic patients with foot ulcers that were referred to our clinic at , ; were evaluated three times a week and treated according to standard treatments consisted of offloading, infection control, vascular improvement and debridement if required. In addition, all ulcers were measured and then topical sterile 5% Royal Jelly was applied on the total surface area of the wounds. Eventually, they were covered with sterile dressings. Each patient was followed for a period of three months or until the complete healing.
RESULTS:
A total of eight patients were enrolled in this study. Of these, two had two ulcers and, therefore, ten ulcers were evaluated. Two ulcers were excluded. Seven of the remained eight ulcers healed. Mean duration of complete healing was 41 days. One ulcer did not completely heal but improved to 40% smaller in length, 32% in width and 28% in depth. The mean length, width and depth reduction rates were 0.35 mm/day, 0.28 mm/day and 0.11 mm/day, respectively. 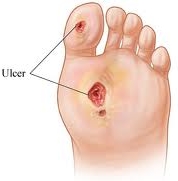