The protective effects of Propolis are extremely important and extremely expansive. Whether you want to treat a physical ailment or to prevent something from getting started, Propolis is THE preventative ingredient to your daily intake. Protecting kidneys with a daily dose of propolis could go a long way to prevent future problems...

Abstract:
Cadmium (Cd) is classified as an environmental pollutant and human carcinogen. Food is the major source of Cd exposure for the general population and cigarette smoking significantly adds to the body burden of Cd (Klaassen et al., 1999). Caffeic acid phenethyl ester (), a biological active component of honeybee propolis extracts, has been used as a folk medicine with no harmful effects on normal cells.

Here we investigated the beneficial effect of on Cd-induced renal damage in mice.

Since renal damage induced by Cd (II) is related to oxidative stress, lipid peroxidation (LPO), protein carbonyl (PCO), superoxide dismutase (SOD), catalase (CAT) and glutathione (GSH) were evaluated. Moreover, the concentrations of Cd and zinc (Zn) in the kidney were analyzed. The intoxication of Cd (II) leads to the enhanced production of LPO and PCO, and the decrease of SOD activity and GSH level, probably due to the serious oxidative stress. However, the activities of CAT in the Cd (II)-induced group showed an elevated tendency, probably relating to an adaptive-response to the oxidative damage. 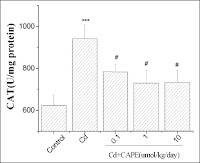 The co-administration of can attenuate the oxidative stress caused by the intoxication of Cd and restore the altered antioxidant defense system.

Based on our data, it is proposed that involve in the protection of renal damage induced by Cd (II) owing to its antioxidant capacity and anti-inflammatory effect.