Since Royal Jelly is produced by honey bees when they eat pollen, it's not surprising to see both these products provide advantages. Bee Pollen is good food, containing all the amino acids necessary for humans, not to mention the full spectrum of vitamins, minerals and trace elements not usually found in foods...

Objectives:
In this study, we aimed to investigate whether royal jelly and bee pollen reduce the bone loss due to osteoporosis in oophorectomized rat model.
Materials and Methods:
Thirty-two female Sprague-Dawley mature rats at six-month-old, weighing 180-260 g were used in the study. The rats were divided into four groups: Sham-operation group, only oophorectomy group, oophorectomy in combination with royal jelly group, and oophorectomy and bee pollen group. The rats were sacrified within 12 weeks following surgery. Bone mineral density (BMD) was measured and blood samples were collected for biochemical analysis before sacrification. Following sacrification, uterine weights were measured and tissue samples were taken to determine bone calcium and phosphate level with imaging through scanning electron microscope. 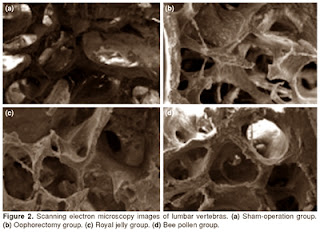 Conclusion:
Royal jelly and bee pollen decrease the bone loss due to osteoporosis in oophorectomized rat model. These results may contribute to the clinical practice...
Royal Jelly also contains a male hormone testosterone. Because of this feature it may also be effective in men’s osteoporosis that could be induced by a decrease of androgen. Considering all these features, RJ and BP may be very beneficial in the treatment of osteoporosis.