Recognized for many years as a nutritional supplement for athletes, this new study reveals that fresh bee pollen improved metabolism and muscle mass in aged rats. An important revelation for an aging population where malnutrition often surfaces.

Although the management of malnutrition is a priority in older people, this population shows a resistance to refeeding. Fresh bee pollen contains nutritional substances of interest for malnourished people. The aim was to evaluate the effect of fresh bee pollen supplementation on refeeding efficiency in old malnourished rats.

Male 22-month-old Wistar rats were undernourished by reducing food intake for 12 weeks. The animals were then renourished for three weeks with the same diet supplemented with 0%, 5% or 10% of fresh monofloral bee pollen. Due to changes in both lean mass and fat mass, body weight decreased during malnutrition and increased after refeeding with no between-group differences (p < 0.0001). 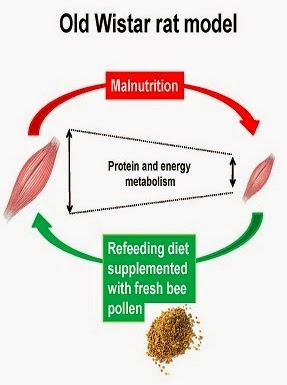 Rats refed with the fresh bee pollen-enriched diets showed a significant increase in muscle mass compared to restricted rats (p < 0.05). The malnutrition period reduced the muscle protein synthesis rate and mTOR/p70S6kinase/4eBP1 activation, and only the 10%-pollen diet was able to restore these parameters. Mitochondrial activity was depressed with food restriction and was only improved by refeeding with the fresh bee pollen-containing diets.