This new study finds honey a promising adjuvant treatment to stop brain tumor cell growth. It worked well against the cells and enhanced the effects of the drug temozolomide. Honey is good medicine and good food with many preventative benefits against chronic diseases. Besides honey, propolis is also very complementary and an ideal adjuvant agent...

Honey has been used as food and a traditional medicament since ancient times. However, recently many scientists have been concentrating on the anti-oxidant, anti-proliferative, anti-inflammatory and other properties of honey. 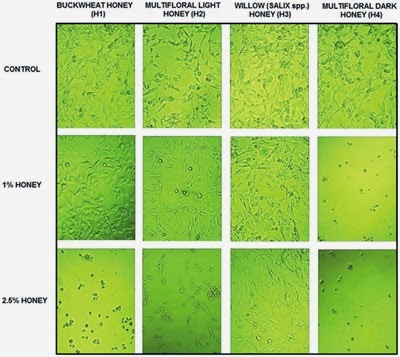 In this study, we investigated for the first time an anticancer effect of different honeys from Poland on tumor cell line - glioblastoma multiforme U87MG. Anti-proliferative activity of honeys and its interferences with temozolomide were determined by a cytotoxicity test and DNA binding by [H3]-thymidine incorporation. A gelatin zymography was used to conduct an evaluation of metalloproteinases (MMP-2 and MMP-9) expression in U87MG treatment with honey samples. 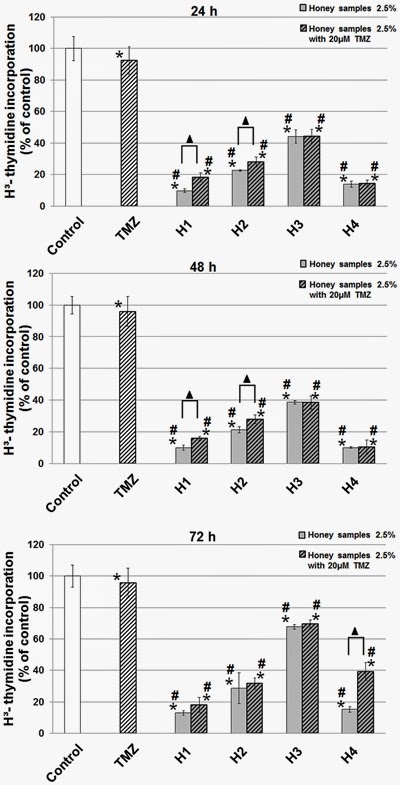 The honeys were previously tested qualitatively (diastase activity, total phenolic content, lead and cadmium content). The data demonstrated that the examined honeys have a potent anti-proliferative effect on U87MG cell line in a time- and dose-dependent manner, being effective at concentrations as low as 0.5% (multifloral light honey - viability 53% after 72 h of incubation). We observed that after 48 h, combining honey with temozolomide showed a significantly higher inhibitory effect than the samples of honey alone. We observed a strong inhibition of MMP-2 and MMP-9 for the tested honeys (from 20 to 56% and from 5 to 58% compared to control, respectively).

Our results suggest that Polish honeys have an anti-proliferative and anti-metastatic effect on U87MG cell line. Therefore, natural bee honey can be considered as a promising adjuvant treatment for brain tumors.