Royal jelly is a hormone-rich substance that is encouraged for women, whether during pregnancy or in menopause. This triple-blind study reinforces the benefits women gain when consuming royal jelly to diminish PMS. Studies dating back to the 70's, identified that a blend of bee pollen and royal jelly reduced symptoms of PMS and menopause. In fact, royal jelly plays an important role in regulating hormones, not only for women, but for men as well.

OBJECTIVES:
To determine the effect of oral consumption of 1000mg Royal Jelly capsule on premenstrual syndrome.

METHOD:
This is a randomized, triple-blind, placebo-controlled clinical trial, which was conducted in Tehran University of Medical Sciences female dormitories between December 2011 and October 2012. The study population comprised 110 medical sciences student with PMS, whom were randomly assigned to an intervention or a control group. Each participant in the intervention group took one Royal jelly capsule orally per day, starting on the first day of menstruation and continued the same treatment daily throughout two consecutive menstrual cycles, while participants in the intervention group took placebo capsules as same method. The outcome measure in this study was PMS score as obtained through the Premenstrual Profile 2005. 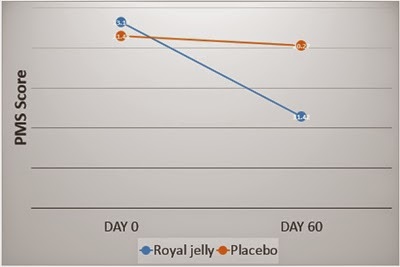 CONCLUSIONS:
The results of the study have demonstrated that 2 months consumption of Royal Jelly was effective in reducing PMS